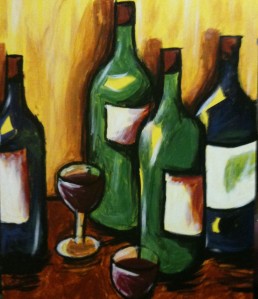 I hesitate to call my mother an alcoholic, still. She definitely had a love affair with the stuff. Her two closest friends drank like fish. My mother spent an awful lot of time drinking with them. She also smoked three packs a day. Billboards at the time showed doctors smoking, too.

My mother used to bitch that Friend #1 would come over and drink all her Seagram’s. When I was a kid, and later in our other house when I was a teenager, I would come home from school and often find my mother and her friend sitting on the couch talking and drinking for the couple of hours between my arrival and my father’s return from work.

“Hi sweetie,” my mother would say, waving the hand with the cigarette. “How was school today?” They would tolerate my presence a few minutes, and then it was time for me to get lost.

My father would come home, greet my mother’s friend, wait for her to finish her drink, and walk the friend out to her car. My father did that because he thought he was being a gentleman to do so, not because said friend ever had any problem walking or driving after an afternoon sucking down her Seagram’s. This was in the day when you could drive with very little worry that the police would bother you about your blood alcohol level.

My mother drank Bacardi Light on ice. Sometimes she added water. The ice crunched as she shoveled it out of the ice bucket and dropped it in the glass. “Clinkety clink,” it went, hitting the bottom of the glass.

She bought both the Bacardi and the Seagram’s in half gallon bottles. I assume she matched her friend drink for drink. I never saw Friend #1 with a full glass when my mother’s was empty. I never saw my mother drink a soda, either, while her friend was drinking the booze. So who was my mother to point the finger at her friend?

My mother complained one day when, after the friend had gone home for the evening, she opened the wall bar we used to have in the living room. She noticed she would need to make a run for some more Seagram’s.

“Friend #1 costs me a fortune,” she muttered. “She’s an alcoholic.”

Friend #2 and my mother had been friends since childhood. They were like two peas in a pod. I loved Friend #2, and often wished she had been my mother, especially when as a teenager I came to detest my own mother. My mother worshipped the ground this friend walked on. She lived in the city, in a big old pre-war rent-controlled apartment on the Upper West Side close to Columbia University. Her husband was an economics professor there. We lived in suburbia.

“Look what I got for my birthday,” my mother said as she walked in the door one day and opened the wall bar. “It even has my initials on it,” She waved it toward me so I could see. “Friend #2 gave it to me so I can go places and not have to worry whether they have Bacardi available at parties we go to.”

It was a silver pint-sized flask with a screw-on top held in place by a little chain. She proceeded to fill it up with a bottle from the bar. “It fits in my purse,” she said, smiling.

I’d already heard the story about why she drank Bacardi. “Gin makes me sick,” told me once. “Bacardi is the only liquor that doesn’t do that.” That was the 1960’s, if my memory serves me correctly. Long before rum, Bacardi Light in particular, was a common-place liquor stocked in home bars.

Most evenings in the summer we spent at the beach club my family belonged to. My father would arrive on the six-o’clock launch from shore, and we would have dinner on the beach of the little island in Long Island Sound that was part of the club. My mother would whip her flask out of the cooler and pour herself a drink or two.

My father drank gin and pink lemonade. He made it with mostly melted frozen pink lemonade concentrate from a can in the cooler, and ice. “Can I have a taste?” I would ask, after I got older. It was delicious.

My mother was not a convivial drinker. By the time I came along and reached my teen years, my older siblings were out of the house. I learned to watch it around my mother when she drank. She often went from a relaxed, friendly drinker, to a witch-on-wheels in what seemed like a sip or two. Good luck guessing which sip or two of which drink would transform her.

“Friend #2 drinks herself to sleep at night,” my mother informed me once. “Something bad happened to her when she was young, and she’s afraid of the dark.” I had less daily exposure to Friend #2, but I never thought twice about her drinking. She was always a sweetheart.

“She’s an alcoholic,” my mother pronounced of this friend, also.

I took counseling training in addictions therapy after I was married. My mother came over to my house one afternoon to visit. I was sitting at my dining room table with books around me while I wrote a paper for my training. My mother stood over my shoulder, a cigarette in one hand and a drink in the other, reading what I was working on. She stood in silence for a few minutes. “This is all fine and dandy,” she said as she read. “But there are no alcoholics in our family.”

My mother has been dead a few years now. I am no longer young. To this day if I hear ice thrown in a glass in a particular way, or if someone swirls half melted ice against the side of a glass in the dregs of a drink, I think of her. I see her standing there, a particular look in her eyes, drink in one hand, cigarette in the other.

Who am I to say she drank too much?

2 thoughts on “PORTRAIT OF MY MOTHER”