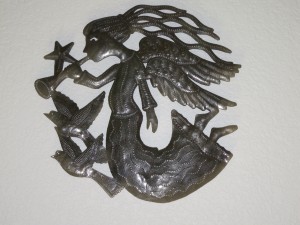 This morning I pulled up to a traffic light with a few other cars and stayed still with my foot on the brake for a minute or so after the light turned green. I sat a couple of car lengths back from the cross walk, in the middle lane, so I had a pretty good view of the intersection. To my left a woman and a young man moved ever so slowly across the street. At first I thought the woman was his mother, for her face radiated patience and acceptance, and was reflected in the face of the young man as unadulterated trust.

She looked back over her shoulder, her arm extended backwards, clutching the outstretched hand of the young man in her own. She wasn’t quite dragging him, but he was obviously moving faster than he wanted to as his feet stumbled clumsily along behind her. He had on a blue tee-shirt, shiny blue and black-edged basketball shorts, white cotton athletic socks, and blue and silver sneakers. She wore a bright red shirt.

On the opposite corner, clustered around the walk light at the edge of the cross walk, stood four other young people and another red-shirted woman, all watching intently as the first woman and her blue-shirted charge moved closer to them. The two women were caretakers of some sort, I realized, and the young people all developmentally and/or physically disabled. The reluctant young man was the most obviously physically impaired. The traffic light turned green as the pair had about a third of the street to still traverse, but no one moved, not even the cars in the far lane that had an unobscured passage in front of them. 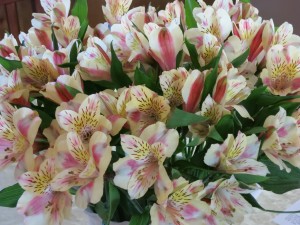 As the blue and silver sneakers stumbled closer to the curb and the red-shirted woman stepped up, the eight arms of the waiting young people stretched out to help pull their companion up onto the curb. For a minute he disappeared into the group. They turned as one to cross the next street. I got the same sense as when I have watched a flock of geese fly in and ski across the water for a second as they close their wings and settle down, then turn in unison and wait for the few stragglers to land and regroup with their fellows. This group of young people functioned as a unit. They were happy to be all together again.

The only difference as I prepared to move ahead was that I witnessed the piece I had not seen just a few minutes before. The group of young people clustered and then began to separate. The first four surged ahead of their friend, their heads turning to watch the stopped cars, and quickly crossed the street with their red-shirted guide and time left on the walk light.

They turned together to look back the way they had come. As I stepped on the gas to move ahead with the traffic, I could see the scene repeating itself as the other red-shirted woman once again began to lead her young man across the street. I knew he wouldn’t make it across before the light changed, and the cars, this time from the other direction, would do exactly as the cluster I was with had done.

I thought as I drove home of how profoundly grateful I am for my own children. If I have to be honest, I don’t think I would have been a good parent to a special needs child. I’m pretty sure I would not have had the patience to honor the spirit of such a person. I realize we never know what we can do until we have to do it, but I doubt I would have been able to do as well as I might have liked.

In witnessing this group crossing the street this morning, it was easy to stop in the moment and realize there is so much more to life than my infinitesimal segment of it. Sure, I was busy. Sure, I had places to go and things to do and was in a hurry to get on with it. I am learning, however, that life is not all about me. I had just come from a meeting with a spiritual mentor. We had been discussing doing God’s will vs. our own. “What does that even mean?” we pondered. We had been reading the St. Francis prayer. 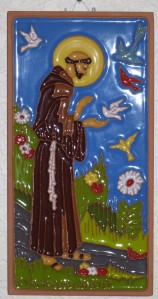 It means my gifts are not my own. It means I am not here solely to help myself, or even those I love. Just in case I was wondering, or needed an example, one was put right under my nose. I am strong, and fit, and able. I was gifted with an opportunity to see one person in a perfect position of service to another. Just because I do not feel drawn to that specific work does not mean that I have nothing to give. Nor does it mean that the perfect work for me is not out there. My job now, hopefully very soon, is to find it. I just need to open my eyes and see.

2 thoughts on “A MOMENT OF GRACE”