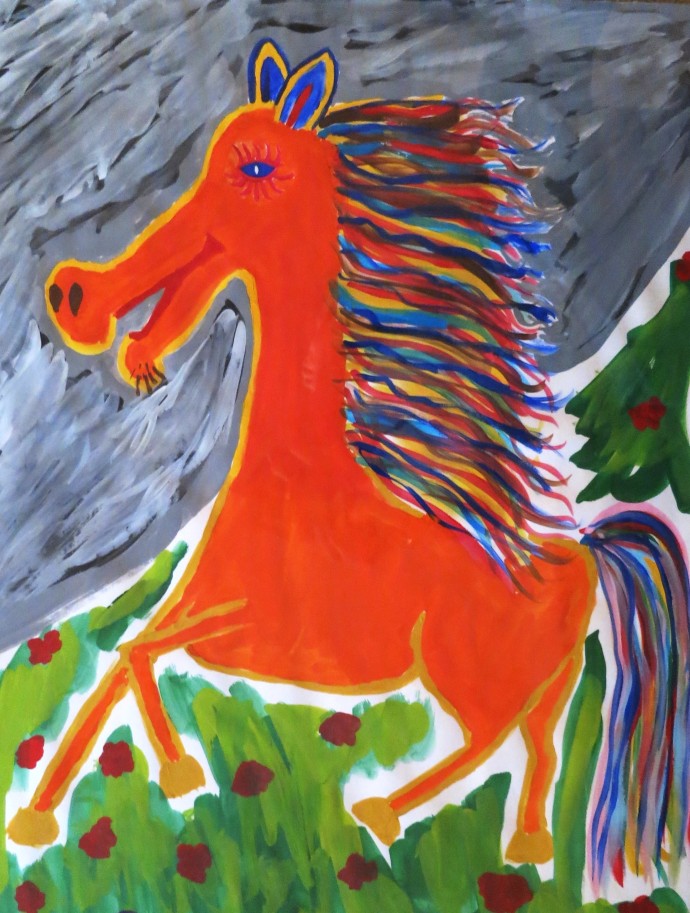 Only a couple of evenings ago I was whining to my dinner companion about the usual circumstances of my life; I can’t seem to find something new to throw my creative energy into that ignites the fire and passion of interest that so many things over the past years has hooked into, that I spend an inordinate amount of time by myself, that on some level, despite the age I am, I still wonder who I will be when I “grow up.”

I detest getting stuck in that kind of mental space. This morning, except for my two dogs, I am sitting alone in my house. The raging snowstorm of yesterday is still sprinkling lightly down on the frozen cars and roadways I can see from my windows. The probability that I will get out on the road and go somewhere today is remote. The only sounds are the hum of my computer and a distant fan in the refrigerator. And the fact is, I am content. Gone is the ennui of that dinner conversation.

This is what I call my “God space.” I got up this morning and went and sat in my healing room in the dark and meditated for a while. Afterwards I sat and wrote in my notebook the visions and conversations I touched on in that time of silence. I am as peaceful and quiet inside this morning as the soft snow outside. From the inside I feel the faintest of smiles along my lips that signals a whole physical relaxing of my face. There is no discontent today.

When I was a little girl I used to like to go and sit in the bare patch of earth under one of the large Maple trees in our front yard. From there I could see other houses and sometimes other children or families as they came and went. I played with a few animal figurines and breathed the scents of the flowers in my mother’s nearby garden. From this time so many years distant from that, what I remember is the peace. The only person I might have welcomed with me would have been my brother. Yet I was never alone.

The earth, the grass, the huge tree and the flowers, even my small animal companions were more than sufficient company. I lived in a different space than most people, it would seem. To my mother I was an “odd” child, scary because I knew things I shouldn’t have, given my age and lack of exposure to the world at large. I knew when things she told me weren’t true or were “dumbed-down” for me to understand. For a while, until I was conditioned otherwise by the world to keep silent, I would confront her about those things.

I have a picture of myself, or mostly of my face anyway, in a silver frame in my healing room. I think I am seventeen in that picture. That is the last year I remember living so freely in this intuitive space, though even then I was shutting down, so much so I often thought of death as a release from being so “odd” and unseen by the people around me.

I have been thinking about doing shamanic work for that girl, doing soul retrieval for the person who never felt like she fitted in, who’s struggled forever after with trying to find love and acceptance from the very people least qualified to offer it. It’s not that I’ve not been blessed by finding many other similarly gifted people along the path of my life, but I want to do work to remove the effects of the suffering caused by the others whose minds were closed. I think it is the suffering, and the fear of it, that keep me from following my path in any big, or public way.

My brother died a few years after I first learned Reiki. Reiki is a healing energy that can cross dimensions of time and space. Healing using Reiki can be sent to any time and place, past or present or future, and even to the dead if you can allow yourself to believe that. So can shamanic spiritual healing be used similarly. I am adept at both.

I have done a lot of reading about life after death. I knew from Catholicism (from my Catholic aunt, to be exact) that prayers were said for the dead to help them ascend into heaven. Other spiritual traditions offer similar assistance. My brother died with a lot of struggle on physical and spiritual levels in his passing. I thought for sure he could use some help in his journey into the next life.

One night as I lay in my bed alone in the darkness of the wee hours of the morning, I got the idea to send him healing. I held my hands upright toward the corner of the wall where it met the ceiling. I sent the Reiki symbols I thought would be most helpful for a couple of minutes, always holding my intention that they find the way to the place where my brother might be.

Suddenly a red triangle appeared in the space near the ceiling. It was like a strand of bright neon light in the shape of an Isosceles triangle. I could see nothing in the interior of the triangle, but the room remained clear and normal outside of it. I could see the symbols I was sending enter the triangle, make a turn to the right, and then disappear. I knew in my heart the healing was reaching him.

I sent him healing many times after that when I woke in the night and thought of him, but I never saw the gateway appear again. Maybe I never needed to see it again, for that one experience was enough to ground my belief in the possibility that this is real. In the years since, I have come across certain esoteric writings that mention the red triangle, and now actually have a friend who says she has seen it herself.

If Reiki can cross such dimensional lines, and shamanic healing can also retrieve energy from the past and the future, why can I not use this to help myself?

Physics tells us now that time is not linear, after all, even though we experience it as so. “Time” is a purely human construct according to many of these same physicists. Science has acknowledged that there are at least 11 other dimensions out there, probably many more. It’s only my own locked-into-the-apparent-here-and-now self that has difficulty with this concept of self-healing, surely not the soul I wish to assist.

So this afternoon, since I can’t go anywhere else anyway, I think I’ll travel the dimensions of time and space and see what I can see. Maybe after a few sessions the person in here and now will be a happier soul.